Rev William Hunt Painter's first curacy was at Barbon in Westmorland (now Cumbria). It was here that he met the Rev Robert Wood who encouraged him to study botany. Hunt Painter was a curate at High Wycombe, Edgbaston, Derby, and Bristol, before becoming the rector of Stirchley.

Painter is associated chiefly with the flora of Derbyshire, and is best known for his studies of bryophytes of Derby, Brecon and Cardiganshire. He took up mosses in 1898 while at Stirchley and joined the Moss Exchange Club in 1903 remaining a member until his death. He contributed vigorously to the exchange and is now rated as one of the best local botanists of his time.

Before he left Stirchley with failing health, he gave his botanical herbarium to the University College of Wales in Aberystwyth where it still forms the main part of the Botanical Department herbarium. However, there are also significant specimen plants at Kew and Oxford, in the Department of Botany at Aberdeen, the Natural History Museum in London, Birmingham University, the National Botanic Garden at Dublin, the City Museum and Art Gallery at Derby, Glasgow University, the Hancock Museum at Newcastle-upon-Tyne, Kew, Manchester Museum, Cardiff and Oxford. 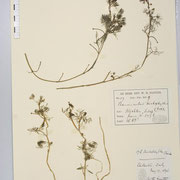 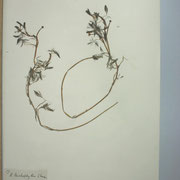 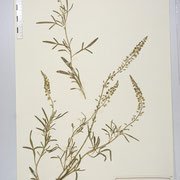 Members of the Shropshire Botanical Society visited Shrewsbury School in 2004 and discovered amongst their collection of botanical specimens an extremely significant find, a type specimen of Painter’s Fumitory, Fumaria painteri, one of the very few plants considered to be endemic to Britain. That is to say it exists nowhere else in the world and in only a single location in this country.

It has only ever been found twice: at Bishops Castle in 1905, and at Ironbridge in 1907, on both occasions by William Painter himself.

Painter named the plant Fumaria confusa (= Fumaria bastardii) but fumitory expert, Herbert Pugsley decided that it was a separate taxon, possibly derived from a hybrid between F. muralis and officinalis. Painter’s Fumitory Fumaria painteri probably arose here by hybridisation, and then died out fairly quickly. It has not been seen again - or has it?

One of the most mysterious and elusive plants in the British Flora is Fumaria painteri, Pugsley, Painter’s Fumitory. It is considered to be a fertile hybrid between F. muralis Sond.ex W.D.J. Koch, Common Ramping-fumitory,and F. officinalis L., Common Fumitory. Sterile hybrids have been reported (very rarely), but the fertile hybrid – which could be considered a species – has only ever been collected in two places in Shropshire; most recently in 1907.

On 13th June 2005 Sarah Whild spotted a plant in hedgerows at Broadoak near Shrewsbury (SJ4916) which keys out precisely to F. painteri. Specimens were collected and sent to NMW and BM.

Some experts, including Tim Rich, agreed that the plant is a dead ringer for F. painteri. Others, including Michael Daker, say they don’t believe that this taxon exists, and would class it as merely a form of F. muralis.

It is not going to be easy to resolve a dispute like this, because even genetic information is not always conclusive. The plant at Broadoak has the same chromosome number as both putative parents (2n = 48).