Stirchley Board School, originally built in 1881, was dismantled, transported and re-erected brick by brick. It reopened as an exhibit at Blists Hill Museum in 1992. This photograph shows the school in situ at Stirchley. Date unknown.

Image above by Elliott Brown 2008 downloaded from Flickr and reusable under Creative Commons Licence.

The school had two rooms; one for infants and one for older pupils. The first Headmistress was Elizabeth Briscoe, assisted by Miss M Cartwright, with Elizabeth Jones as monitress. Miss Briscoe found the 48 children ‘anything but intelligent’.

The headmistress wrote in the school's Log Book in September 1882: ‘Many children still away gleaning’.

See the Dawley Heritage website for a biography of Elsie Day, headmistress at Stirchley School from 1913 to 1927. It was written by Ros Collin, the present owner of Hazeldene House in Southall Road, Dawley where Elsie used to live.

Below: All that remains of the old school in Stirchley in 2010 is the wall and gateway. The school site and the playground have returned to nature.

Image left is from the book, "Maggie Humphry's Shropshire".

You can buy high quality reproduction prints from the book of various Shropshire places at  http://www.maggie-humphry.co.uk/.

Personal and educational use permitted. 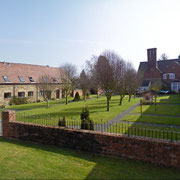 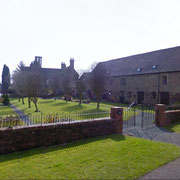 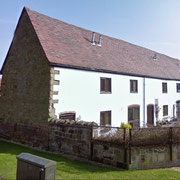 This is now a development of private homes converted from the old hall and its outhouses and barns. The view here is from Stirchley Road. What can be seen of the hall is the rear of the building. The front faces away from the road.

Stirchley Hall Farm probably represents the manor house of Stirchley from at least the 13th century, the centre of a large farming estate. The manor of 'Styrcleage' was bequeathed in his will by the Anglo-Saxon noblewoman, Wulfric Spot to Burton Abbey c1003. By 1375 the overlordship of Stirchley had passed to Richard, earl of Arundel and Surrey. Whether there was a manor house here at this early date is open to question.

There is evidence of a 'hall of Stirchley' in the mid 14th century. Stirchley Hall descended with the earldom of Arundel until 1560 when it was sold. It passed through the hands of a number of owners until it was sold to Robert Clowes in 1683. On his death in 1704 Clowes left the estate to his cousin Thomas Clowes, on whose death in 1740 it descended to his son Thomas. He also bought (Stirchley) Grange Farm in 1747 and died without issue in 1748. The estate then descended with Grange Farm until both properties were bought by the Haybridge Iron Company in 1886. In 1964 the hall and its estate were sold to the Dawley Development Corporation for the building of Telford new town.

The oldest part of the present hall, the hall ceiling and chimney stack date from Tudor times. Initials R P on the central boss of the ceiling are attributed to Roger Poyner, tenant of the house in 1567. The centre of the hall's south front represents the 17th-century stone house, which was remodelled from the earlier building in 1653. The chimney stack was repaired in 1721 and the brick western cross wing ma also have been added then. The north and the east ends have 18th-century and early 19th-century additions.

The estate was leased to the Botfield family in 1811 who established the 'Old Park' brickworks, collieries and ironworks on the estate lands. The house was bought by Telford Development Corporation in 1964, who later sold it for private residential use.

The hall and its stable blocks are Grade II Listed buildings.

This is the unadopted lane leading from Stirchley Road to the Church and Old Rectory in 2010. There were formerly a number of other cottages here like these which comprised the heart of Stirchley Village.

The Rose & Crown was set up as a public house in an existing house about 1840. Situated at the centre of Stirchley Village, it was as much a focus for village life as was the church. At this time it would have served the rural community as well as the expanding industrial one.

The local hunt often set-off from the pub in the 1930s and the Stirchley village football club met there up until the 1960s. The pub was greatly extended with the Telford housing development of Brookside and Stirchley and has a very active social life.

The National Census of 1871 was the first to record The Elms. The head of the household was mining bailiff Elias Round who lived here with his wife Rosana and their six children. In 1881 22-year old mining engineer Thomas Wynne was living here with his two unmarried sisters aged 18 and 13 and a domestic servant. And in 1891 the occupant was Frederick Williams who was the manager of a chemical works engaged in the destructive distillation of wood. He and his wife Elizabeth had five young children. The family were still here ten years later with a 17-year old daughter working as a pupil teacher at the school and a 16-year old son a clerk at the iron works.

This row of substantial brick built terrace houses was built in the 1840s for the managers of the Old Park Company Ironworks. Hence its local nickname, 'Clerks Row'.

When the cottages were constructed they would have looked out on to the workings of the Grange Colliery and the blast furnaces at the site of the Stirchley Chimney.

Compared to the poor standard of housing that existed in Stirchley at that time, the houses at Northwood Terrace would have been described as quite superior.

During the 1930s it is recounted that many lorries would have thundered up and down Northwood Terrace as they transported slag from the old furnaces for use as hard core in the construction of military airfields throughout Shropshire.

Text above from the South Telford Heritage Trail website - Educational and personal use permitted.

The 1851 National Census refers to this row of houses as Stirchley Terrace whose residents included an iron agent, a furnace manager, an accountant, a stock-taker and an iron works manager. In 1861 it is Northwood Terrace, in 1871 Clerks' Row.

Stirchley Grange/ Grange Farm originated as a grange farm of Buildwas Abbey and was probably established in the mid-13th century after the Abbey acquired the manor.

A grange was a farm some distance from the main abbey and was often run, not by the monks, but by lay brothers.

Image by Steve McShane on Geograph

With the dissolution of the monasteries by Henry VIII the abbey's lands were taken over by the Crown. In 1537 Lord Grey of Powis bought Stirchley Grange and its estate together with most of Buildwas Abbey's other property. Grey gave Stirchley Grange to his son Edward, who sold it c1576 to Sir John Throckmorton, on whose death in 1580 it passed to his son Francis, the Catholic conspirator against Elizabeth I. On his execution for treason in 1584 the estate again reverted to the Crown.

The Grange passed through a number of hands until 1621 when it was bought by William Cooke of Snitterfield, Warwickshire. It then remained with his descendants for 100 years until Richard Cooke bequeathed it in 1725 to his godson, Rev Richard Phillips.

A memorial tablet in the church commemorates Edward Cooke of Stirchley Grange who died in 1680. See More about Stirchley Church.

Phillips sold Grange Farm in 1747 to Thomas Clowes who owned Stirchley Hall. Both properties were bought by Isaac Hawkins Browne of Foston, Derbyshire in 1777. Browne was a Member of Parliament for Bridgnorth 1784-1812 and worked with the Botfield brothers in the coal and iron extraction and production industries in Dawley and Stirchley.

The two Stirchley estates were bought in 1886 to the Haybridge Iron Company which later sold them separately. Grange Farm had a number of owners before being bought by Dawley Development Corporation in 1965 to build the new town of Telford.

No above-ground remains of the medieval grange buildings survive. Grange farmhouse is a long red brick range with gable-ended tile roof, the greater part probably dating from the time of the Cookes family.

There is a 17th-century brick wing with the vestiges of stone mullioned windows. The building was added to in the 18th century. Inside there are heavily moulded ceiling beams. Although it has been altered and added to, this is a Grade II Listed building, and currently unoccupied.