The Church of St James, Stirchley

When you open the wrought iron gate to enter the churchyard of St James' Church, the first impression is of a typical small 18th-century church.

It is built of brick with round arches dressed with local sandstone in a simple neo-classical style with its west tower and simple nave. 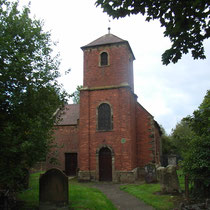 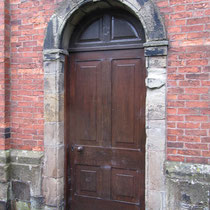 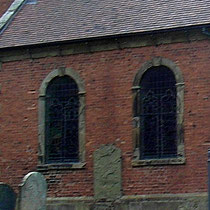 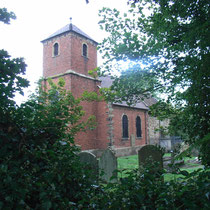 - but with a 12th-century chancel

Walk round the side of the church, however, and the solid mass of sandstone blocks that make up the heavy square chancel, comes as something of a shock.

The tiny narrow windows give an impression of great antiquity.

This is part of the original church building that was built around the middle of the 12th century. It is almost 900 years old.

Inside the church, the same startling contrast can be seen.

High box pews and a wooden two-decker pulpit typical of the 1700s are set against a magnificent Norman arch carved with three different motifs.The earliest arch dates from about the year 1150.

Both the church and its churchyard are Scheduled Ancient Monuments and the church building itself has a Grade I listing, reflecting both its national historical and architectural importance.

Architectural evidence shows Stirchley church to be of Norman origin and to date from the 12th century. However, it is also suggested that the chancel arch may actually be set in an even older Anglo-Saxon one.

Walter, described as the chaplain of Stirchley, is the first rector whose name is known. He was the priest here from c1220-1230. However, the church was over 100 years old by the time Walter conducted the services here.

Of the foundation of Stirchley church, Rev Robert Eyton wrote in his ‘The Antiquities of Shropshire' 1885:

‘This was in its original state a chapel, probably in the Parish of Idsall [Shifnal], and founded by the Manorial Lords of Stirchley in the twelfth century.’

The chancel is the oldest visible part of the building and probably dates from about 1150. It is almost square and has small Norman round-arched windows. Old masonry on the inner face of the nave and tower walls is also likely to be 12th century. The work may have been financed by first recorded lord of the manor, Osbert of Stirchley who was the under-tenant here from 1167 to 1180.

The ornate late-12th-century chancel arch is set in a larger and earlier arch, probably of the mid-12th century. The stone used is local sandstone. This is a particularly fine chancel arch with two orders of shafts with scalloped and foliage capitals and three orders of arches with rosette, chain-link and zigzag patterns. 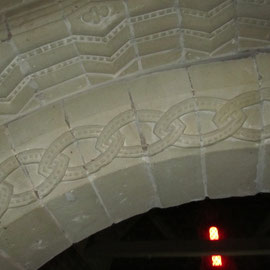 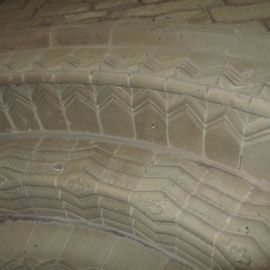 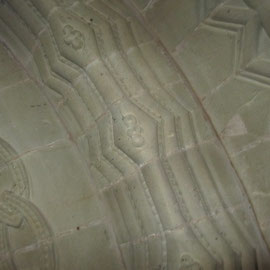 With the exception of a new Early English window with Y-tracery in the south wall of the chancel which was inserted sometime during the 14th century, nothing further was done to the structure of the building until 1740.

The windows at St James 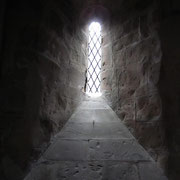 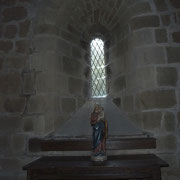 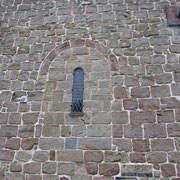 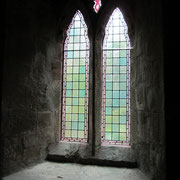 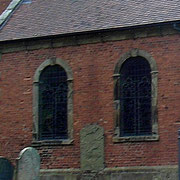 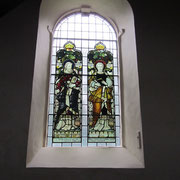 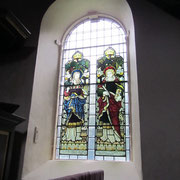 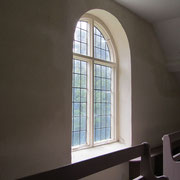 The stained glass is Victorian and Edwardian, probably by Clayton & Bell of London, and was brought from nearby Burwarton church when it closed c1975.

The 18th Century - encased in brick

About 1740, during the incumbency of William Banks, the stone-built nave was encased and remodelled in red brick with dressings of sandstone in the contemporary neo-classical style. It was a scenario that was taking place all over the country at that time. A new roof was erected and a flat plaster ceiling installed.

The stone tower was also encased in brick and heightened by one stage, the wooden bell frame dates from 1748, although the three bells are much older being dated 1410, 1594 and 1664.

The nave was also refitted in the style of the time, with high box pews and a new two-decker pulpit and reading desk with an overhead sounding board. The emphasis of church services at this time was on the reading of Bible and on preaching rather than the ritual of the Mass which had taken place in the chancel. A large pew directly in front of the pulpit was the most prestigious and was reserved for the sponsor of the rebuilding, the lord of the manor.

From 1683 to 1748 the manor of Stirchley was in the hands of the Clowes family of Stirchley Hall. The last member of that family, Thomas Clowes had no successors and it may be that it was he who instigated and financed what must have been expensive alterations to the church. The dedication to St James is known from this time, though whether this was a new dedication or a continuing dedication is not known.

It is interesting to conjecture why the stone-faced chancel was not also encased in brick. It may relate to the fact that a church nave was traditionally the responsibility of the parishioners, while the chancel was that of the incumbent. Or it may be that, despite the enthusiasm for the classical style, there was sufficient respect for the centuries-old Norman building, that it was left unaltered. Or it may be that it was simply too expensive to finish the job.

In the early 19th century the lower of the two original east windows was replaced by a single larger one. And in 1838 the local ironmasters, Thomas, William, and Beriah Botfield provided 120 new sittings by constructing a north aisle which incorporated a gallery for their workmen. The gallery extended into the nave, cutting into, and partly obscuring, the medieval chancel arch.

This Transept and Gallery was erected by Thomas William and Beriah Botfield at their sole expense for the accommodation of their workmen and Poor in this and the adjoining Parish. Also the Vault under this Transept was built for their own use.  Anno Domini 1838

The new east window was replaced later that century by a small one similar to the original Norman chancel windows, reflecting the Victorian enthusiasm for restoring churches to what was believed to be their medieval state.

The 18th-century nave ceiling, which had become unsafe, was removed in 1877 at the end of Hugo Moreton Phillips' time as rector. However, the high box pews and the two-decker pulpit were allowed to remain. In most 19th-century English churches these were removed and relatively few now remain.

A tablet in the church commemorates the Rev William Hunt Painter, 'for 15 years Rector of this Parish, during which time he was mainly instrumental in restoring the church and rectory.'

It is thought that this may have consisted in making good the fabric of the building rather than making any alterations, with the exception of laying the Jackfield tiles which were also laid in the hall of the Rectory.

In 1919, during the time of Rev H Penkivil, the front of the gallery was set back into the north aisle to be less obstrusive. 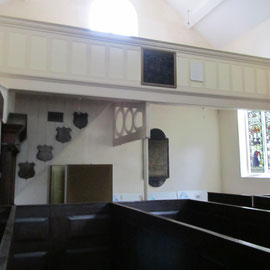 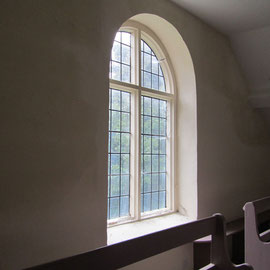 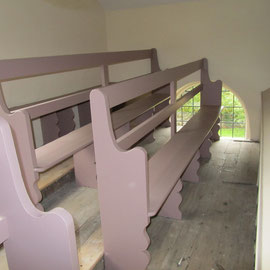 With the creation of Central Telford parish in 1975 St James' Church became redundant, and was sold in 1978 to the Telford Development Corporation, who restored it in 1979 as a museum.

During the restoration of 1979 the plaster was removed from the east wall of the nave, and some small areas of late medieval wall painting were exposed.

The church was handed over to the Churches Conservation Trust in 2006 and the roof and rainwater goods were made sound. The building is now in a very good state of preservation.

The ring of three bells had been unringable for many years.

See the Shropshire Association of Church Bellringers website for pictures of the bells and their inscriptions.

The church is open from time to time and is manned by volunteers.

It is possible to gain access at other times by arrangement - see the Churches Conservation Trust website.

More images of Stirchley Church on the next page. Click here.